Green Lightning is fast-acting microbial product for use in static and slow moving water. It effectively controls swimming or floating unicellular and filamentous algae. Including Cladophera, Rhizoclonium, Spirogyra (common Blanket Weed), Vaucheria and Ulothrix. It improves the clarity of water and reduces unpleasant odours within days of treatment.

This “natural” method includes the use of safe (non-pathogenic) bacteria. It contains strains belonging the Bacillus genus and includes both aerobic and facultatively anaerobic strains. 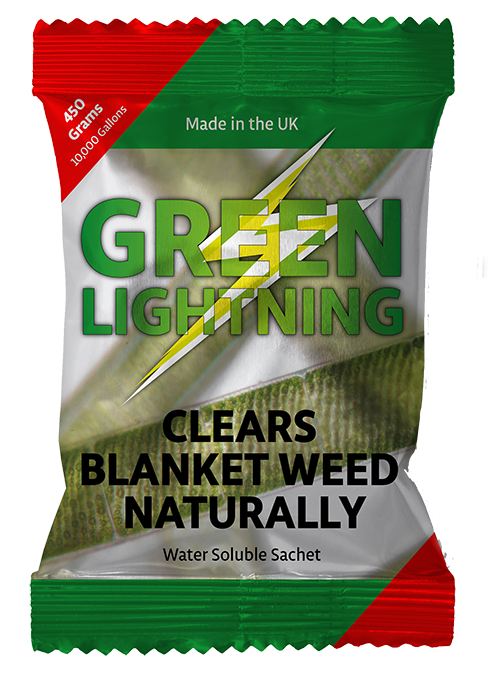 These bacteria actively remove nutrients required by the main filamentous algae in the pond such as Spirogyra, Cladophera, Rhizoclonium,Vaucheria and Ulothrix for any excessive waste derivates such as fat, oil and grease, proteins, sugars, starch and cellulose. They also consume Nitrates, dissolved Ammonia and Phosphates. The bacteria remove theses very basic components required by Blanket Weed and the water becomes clearer. Any unpleasant odour is generally removed too. These “good” bacteria do not however have an effect direct effect on single cell algae and blue-green algae such as Microcystis. Microcystis Aerugynosa is a member of the Cyanobacteria and can produce harmful toxins to both fish and land animals. Fortunately in ornamental ponds an Ultraviolet Light can kill these single cell algae.

An environmentally efficient algae treatment in static and slow moving water. The tried and tested answer to the removal and prevention of Blanket Weed.

450g water soluble bag treats up to 22,000 gallons and can be used to treat smaller ponds. SIMPLY THROW THE BAG INTO THE POND and the water soluble plastic will dissolve. Contains approximately a TRILLION ready brewed freeze dried bacteria which rapidly act to remove BLANKETWEED nutrients and clarify the water. Each water soluble bag can be held in the palm of your hand.

WHAT IS BLANKET WEED

Blanket weed (Spirogyra adnate) is one of the most prolific aquatic weeds known to amateur and professional pond-keepers in the U.K. In The USA it is called Long String Algae. This description is pretty accurate because in effect Spirogyra is not a plant but a filamentous algae. There are several other aquatic weeds which are also filamentous algae and the most prevalent of these are Cladophera, Rhizoclonium, Vaucheria and Ulothrix (Ulothrix is a Chlorphyte like Spirogyra and looks very similar)

Blanket Weed is a long thin filamentous alga, which like Ulothrix thrives in ornamental ponds. As can be seen from the microscopic observation, the cells of Spirogyra are characterised by helical shaped chloroplasts which give the weed the pronounced green commonly associated with Blanket Weed. Its growth is increased by bright sunlight and shallow fast running water so that it will be found in water-falls and unshaded pond areas. In ornamental ponds which tend be stocked with fish, the tendency to overfeed causes additional fish excrement which contains nutrients favoured by Blanket Weed particularly nitrates and dissolved ammonia. This means that apart from normal growth by photosynthesis the weed will grow even faster.

The spores of Spirogyra can be preserved in the dry state for many years and come back to life when put into water. Ponds can be free of Blanket Weed for years and suddenly become infested. Pulling weed out actually releases spores produced by conjugation (see photo - bottom left), which then produce even more weed.
The proliferation of Blanket Weed is due to the fact that it grows very quickly in sunlight and if left unchecked can cause serious oxygen depletion in ponds. Additionally it can also cause stress to larger fish that find it an obstruction

Green Lightning is now recognised as one of the best-selling treatments for Blanket Weed in the U.K. and is used by amateurs and professionals alike.

It is a totally safe natural product that cannot harm flora or fauna and is specifically designed to remove Blanket Weed and clarify ponds and lakes.

Green Lightning is supplied in a convenient 450 gm water soluble bag so all you have to do is to throw the bag into the water being treated whereupon it will dissolve and release its contents.

The Dept of the Environment have effectively banned all chemical treatments to kill Blanket Weed. Some proprietary brands are still sold in Europe but the favoured method of Blanket Weed control is the use of “natural” methods. The simplest of these “natural” treatments is to stock the pond with plants and animals that actively consume blanket weed or compete for the same food. This would establish a natural equilibrium in the pond but in practice would limit the number of fauna and flora making the pond less of an ornamental feature.

Other non chemical removal methods include the aggressive use of metallic ions such as copper which if not dosed correctly can kill fish and plants. Still other natural methods using barley straw have varied results but in many cases the Blanket Weed will develop an immunity and often re-appears with a vengeance and does not respond any more to this type of treatment.

Packaging may differ from illustration shown as we now supply in water soluble bags to help reduce plastic pollution.

Ideal Period of use

Think of Green Lightning as a course of medicine which first cures and then prevents Blanket Weed by further application. In most cases the weed disappears entirely.

Helpful hints: In hot weather you MUST keep your pond aerated. Use a fountain or other method to keep oxygen in the water. TURN OFF your Ultra Violet Lamps when using Green Lightning as the bacteria in it will otherwise not survive. 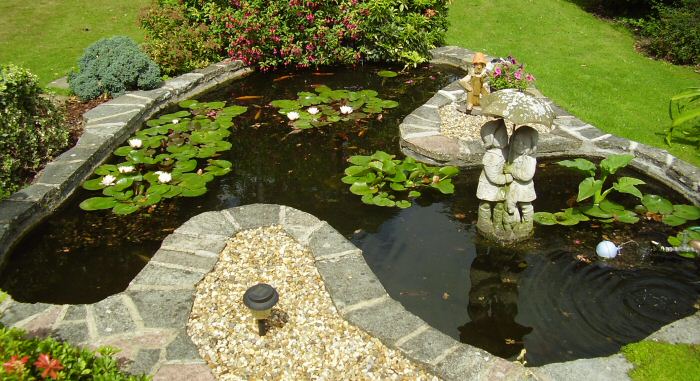 Available in 450g water soluble sachets (suitable for ponds up to 22,000 gallons) Consists of about a TRILLION bacteria ready brewed which can be added to the pond instantly.

Simply throw the sachet into the centre of the pond or where the Blanket Weed is growing and the bacteria will discourage the Blanket Weed and clarify the water. If you wish to part use the sachet then be sure to keep what you don’t use in a dry place. You will need a boat for larger ponds and lakes to reach the middle area.

As you will see a single 450 gram bag of Green Lightning was the smallest size we used to sell but now, for smaller ponds, we sell a small 100gms bag. The recommended doses are listed above but please remember to store the unused Green Lightning in a dry place. Where the water temperature is low put chosen contents into a bucket of warm water and leave over-night in a warm environment. Next day tip the contents into your pond. Repeat every 2-3 weeks until all the contents are used. 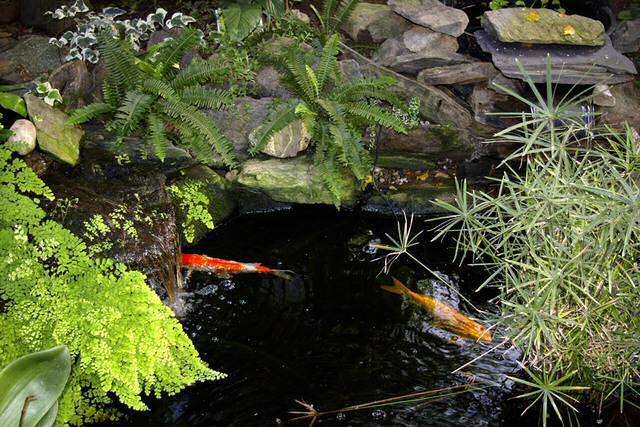 One of the catalysts for Blanket Weed is fish excrement and ammonia so overfeeding fish will cause the weed to grow faster. In general most fish will eat everything they are given so it is essential to try and feed only what is necessary. Try NOT to pull out blanket weed unless really prolific because the spores produced by the weed are then released into the pond and cause more weed to grow.

Make sure that fertilisers are not seeping into your pond from nearby fields or lawns. When topping up your pond try and use rainwater if possible as tap water often contains higher mineral contents which also cause the blanket weed to grow more quickly

Other methods of getting rid of blanket weed naturally, which are recommended, are the insertion of a bag of Zeolite, which absorbs ammonia. Be sure to change the bag at least once a month.

Natural-Balance: If you did nothing to your pond at all and never fed your fish equilibrium would be established as happens in nature. This would result in a few fish surviving and the water becoming populated with a variety of flora and fauna. There would most likely be very little if any blanket weed. It is therefore in most cases the upsetting of nature’s equilibrium which causes excessive weed and we have attempted on this site to show you how you can attempt to naturally restore equilibrium by using natural and totally safe methods.

Tumbleweed Worm Blanket (Round or Rectangular)

Replacement Tap for the Can-O-Worms